You read that headline correctly. Jake Sharp is back, and just in time. 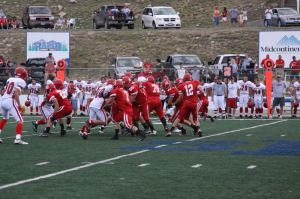 The Cobblers’ football team closes its regular season at 7:00PM Thursday at O’Hara Stadium with a big game against the in-town rival Stevens Raiders. The Stevens game has been particularly good for the Cobblers lately, as they have won the last five match-ups.

While the Cobblers’ record is not what they would like it to be, the prospects for a win are better than one might think. Star running back Jake Sharp will return to the line-up, as will stand-out freshman Aaron Beaird. It remains to be seen, meanwhile, who Stevens will have at quarterback–last week in their game against Sioux Falls Washington they were without their first two strings.

The Cobblers are going to be looking to overcome the Raiders with their speed and size, making key plays when the opportunities arise. A key to this effort will be eliminating the mistakes that have plagued the Cobblers in previous games.

In addition to the football game, the Cobblers will be looking to defeat the Stevens cheerleaders and marching band in the intermission races. The Cobbler cheering squad is out for revenge, as Stevens beat them in last year’s cheerleading race, while the marching band will be hoping to overcome the loss of drummer and state 100M dash champ Chad Hofkamp, who had paced the tuba runners to a couple of solid victories.

With the best fans in South Dakota, Central will be looking for as many of the students to be there as possible–so we’ll see you there!