Dominique Dawes once said, “You have to have stepping stone goals that are within reach. Once you keep getting up those stepping stones, you’ll reach the pinnacle of your goals and your dreams.”

Dawes was an Olympic gymnast, and she obviously had to go through some tough times to be a gold medalist but I really liked this quote not only because of how true it is for her, but because of how personal it is to me. 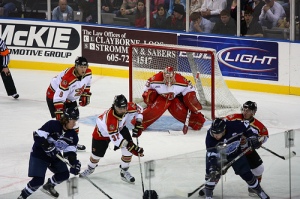 This quote was personal to me because I started not just playing hockey, but skating at age 13. I could hardly move my first time on the ice. I had to work extremely hard and set small, but meaningful goals for myself. I was told many times that I couldn’t do it, and now I’m being asked to play for Rushmore, and they are even willing to give me a scholarship. If I had tried to say at the very beginning that I wanted to play in the NHL someday, there’s no way I would be where I am now. But in my case, I made these “stepping stone goals” which seem to be leading me to the pinnacle of my goals and dreams.