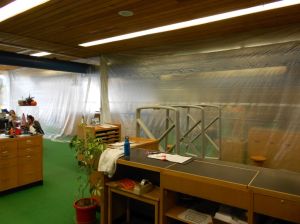 A week after drips from the ceiling led librarians and custodians to redecorate the library with buckets, basins, and plastic, half the library continues to be off limits–the fiction and reference sections. The fall out from the blizzard may be drawing to a close, however, as custodians have been drying the carpet with blowers and emptying the buckets and trash cans of the collected water. Beginning Friday afternoon carpet cleaners are coming to make sure nothing lasting is growing in the carpet, which should mean that on Monday students can resume browsing through and checking out fiction.

The football team is riding high after their 13-9 victory over Sioux Falls Washington, their first win over a Sioux Falls school since 2006 and the first time the Cobblers have won in Howard Wood Stadium since 1998. For perspective, a Central graduate from that year would likely be 32 years old today. Tonight the boys take on Stevens, and it is worth noting that  lineman Aaron Beaird will be back in action, so here’s to hoping the team can keep up its excitement, focus, and confidence.

One thing that will be missing at tonight’s game is the sound of the marching band. The Cobblers-Raiders game was supposed to be next Thursday, and when the state rescheduled the game it conflicted with the marching bands’ annual state competition trip, which means instead of two marching bands, as usual for the cross-town rivalry, there will be none. Also out will be the annual tuba-race, robbing the Cobbler band of a chance to redeem themselves from last year’s defeat. Alas.

Regarding that trip, the band left this morning for Sioux Falls. It is a bit of a different year for the Cobblers, as the weather–and blizzard–have taken a bite out of the practice time, and the band will be playing for comments instead of competition. (The piece they’ll be playing isn’t long enough for competition.) Surely they’ll represent us well, however, and have a great time . . .

The English department looked a little different on Wednesday and Thursday, with every language arts teacher being gone one of the two days. The teachers attended a training funded by the state to work with the common core state standards and will do the same thing again in December. Call it a test of the depth of Rapid City’s substitute teacher pool . . .

Students auditioned earlier this week for all-state orchestra. Musicians were finding out Friday morning whether they made it, and selected members will head to Sioux Falls on Halloween to play in the annual show.