As our nation struggles to obtain its energy independence, we must examine a variety of resources that have the potential to fuel our way of life. However, some of these resources could easily wreak havoc upon our environment and endanger the lives of millions. As a result of this, we must thoroughly evaluate the benefits and detriments of an energy source before we put it to widespread use, and uranium is no exception. Using uranium as fuel could engender a literally radiant future for our nation, but extracting and utilizing the mineral could have catastrophic consequences. Overall, we must be well aware of any of these potential consequences before we allow Powertech, a Canadian mining company, to extract uranium in the Black Hills. 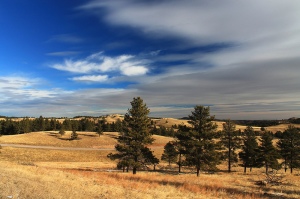 Powertech plans to use a mining technique known as In Situ uranium mining, which is often heralded as the most cost-efficient and environment-friendly form of uranium extraction. Instead of openly exposing the uranium, water from an aquifer and several chemicals (such as hydrogen peroxide and sulfuric acid) are used to dissolve the ore. After this occurs, the solution containing the uranium ore is pumped back to the surface (In Situ Leach (ISL) Mining of Uranium). This process is supposed to produce extremely low levels of waste, but critics are still very skeptical about the environmental impacts of In Situ mining. For example, “dozens of leaks and violations at other In Situ mines around the country show that contamination is possible” (O’Sullivan). This revelation is very startling considering that the Madison aquifer, which is one of two aquifers that would supply the uranium mine, is also used to provide ranchers and their livestock with water (Powertech (USA); Inc.). Powertech has stated that it will test groundwater and wells within 2 km of the project area for contamination (United States), but the vice president of the company stated that cleansing the water in the mining area is merely a priority and not a requirement (O’Sullivan). This particular fact is extremely alarming, and it indicates that safety may not be a prominent desire of the company. Overall, Powertech has displayed some effort to meet safety requirements, but the company has failed to provide adequate details concerning the risks of the operation.

In addition to this, Powertech has not provided substantial amounts of information about the proposed In Situ mining project, and the information that has been disclosed is obscure and ambiguous. For example, “Company officials have wavered at times in their explanation of what they will do, how much water they will use, how many jobs will be created, and what risks exist” (O’Sullivan). Furthermore, Powertech has not specified which heavy metal would be extracted in addition to uranium, and it has not given a specific amount of water that the mining operation would consume. The company is currently requesting permission to use 8500 gallons of the state’s aquifer water per minute, but Powertech stated that it would only need 4000 gallons per minute when it consulted with the U.S. Nuclear Regulatory Commission (O’Sullivan). Without this information, it will be impossible for our state government to reach an acceptable conclusion on the uranium mining project.

Even though it is ultimately the responsibility of the State to make a decision about the proposed In Situ uranium mine, the public must be made aware of all information regarding the project. Powertech’s proposal could have many positive implications for the region, but public and environmental safety standards are paramount, and the failure of Powertech to disclose accurate information about the mine could have horrific consequences. In final analysis, Powertech must be held accountable for its actions and the quality of the information that it provides to the public, and the public must be made completely aware of even the slightest safety concern posed by the uranium mine.

One thought on “Should South Dakota allow uranium mining in the Black Hills?”