Some teachers are so much a part of Central High School it’s hard to imagine when they weren’t a part of it. Orchestra teacher Bruce Knowles heads such a list. But where did this man come from? And why did he choose to stay here?

When you first walk into Bruce Knowles’s office, you see a lot of senior announcements from past students and a very cool Sharknado poster, and the room’s occupant might tell you about his love of sauerkraut. But if you want to know how long he’s been at Central, he makes you work for it. “I’ve been the orchestra teacher at Central since 1984. You do the math.” Bruce Knowles did say that he has loved every minute of it. He is also the conductor for the Black Hills Symphony Orchestra, a position he has held for seven seasons.  Mr. Knowles actually came to Rapid City from Iowa at the age of 16 to be with his dad, and he graduated from Rapid City High, Class of ‘Old Skool.’ He later went to SDSU for a bachelor of music and Western Illinois University, along with Northern Colorado University, for his masters of music performance. 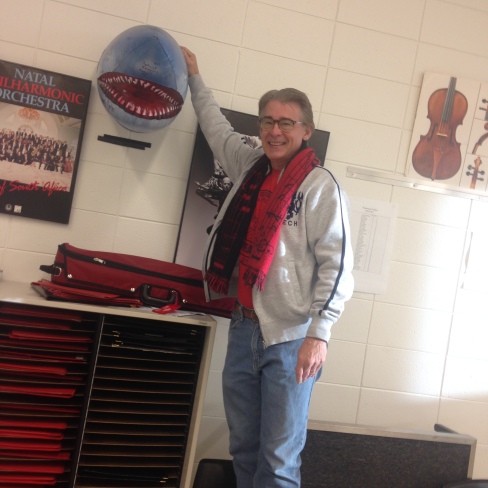 He can play all strings instruments proficiently (viola, violin, cello, bass), but he majors in playing the double bass. “When I first started orchestra I was 16 and my teacher’s name was Paul Patterson. I was immediately drawn to the double bass and never looked back.” He actually initially played the electric bass and was told that switching to play the double bass was very easy. He played in a bunch of different groups including orchestra, of course, and jazz band. It also helped that his father was the band director at Rapid City High School when he went there.

At Bergquist Elementary when he had to teach in a kitchen while people were making lunch. He has also taught in a janitor’s closet.

“My favorite grade to teach is probably the fourth and fifth graders, because it’s fun to watch them grow,” explained Mr. Knowles. He teaches at Wilson Elementary and South Park Elementary. Teaching has brought its adventures, like at Bergquist Elementary when he had to teach in a kitchen while people were making lunch. He has also taught in a janitor’s closet before. When asked why he wanted to teach at Central as the orchestra teacher, he explained that he wanted to develop students’ skills in Central’s orchestra department.

When Mr. Knowles moved here from Iowa, he always felt welcomed because everyone was nice. He remembers the old Rapid City High School and how crowded it was, so crowded in fact that they had to walk across 5th Street for temporary classes, and some people also had to go to a church that was nearby to have classes in the basement. “Back then, the band and the orchestra had to share classrooms, while choir had their own classroom. It got very noisy and overcrowded.”

Even after he graduated from high school, though, he never really thought of moving away. “I’ve always just really liked it here.”