Mike Hagen is a new teacher at Central this year. He wanted to become a teacher because he has “always had a passion for helping kids achieve.” Whether it be academics or athletics, Hagen wanted to use his passion as a teacher. This is his fourth year coaching track at Central. He has also coached football for three years. 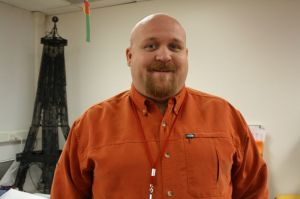 Hagen is a Cobbler graduate and loves Central High. He was a student teacher for Mr. Palmer for one semester in the spring of 2009. He says he loves teaching so far thanks to his students and his fellow language arts department teachers. His experience here has been all that he expected: there are joys, but there are also challenges being a high school teacher. He says “Its been a really good fit.”

He went to college at Black Hills State University and majored in composite speech. Before Hagen started teaching, he had managed a restaurant called Old Chicago at locations throughout the Midwest for eight years.

Hagen has been married to his wife Michelle for nine years. They have a daughter named Murielle who is two and a half years old. They also have a son named Mason who is only a few weeks old. They have two chocolate labs named Morgen and Jack. Hagen’s hobbies include golf, travel, photography and cooking.