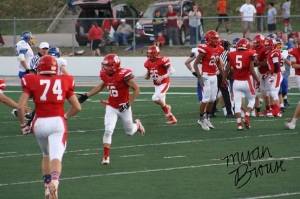 This season hasn’t gone as expected for the 2015-16 Central Cobblers’ football team, starting off the season with an 0-4 record, but the coaching staff and players are optimistic and are working very hard to change things. It’s homecoming week but the Cobblers aren’t preparing for this game any differently than the rest of the season, according to Coach Rob Sales. We asked him, with this being the half way point of the season, what positives stand out the most? He said, “There are numerous positives I could talk about, but the one that stands out the most is the cohesiveness of the team. That coming together is huge in team sports.”

This Friday the Cobblers play Sioux Falls Washington, a team who’s been on top the past decade. The Cobblers will need to play assignment-sound football at their best in order to come out with the victory.  Arguably the best tackle in the state of South Dakota, Matt Farniok, will be going up against our very own Derric Tiller, which itself will be a match up worth the 5 dollar admission.