Assistant Principal Mr. Seales has been tearing through the hallways on a scooter lately. Rumors abound regarding the cause and the consequences of letting a principal wield this kind of power.

By Lexus Orozco and Sage Preble

Recently, Mr. Seales has been seen stalking the halls on his scooter, terrorizing students with his cart’s unnatural speeds. No one seems to know what happened to his legs/feet, or where he even got the scooter, and we can only assume something . . . ominous happened.

“He’s not hurt, he just stole the cart from an old lady in Walmart,” says one anonymous student. “He’s a parasite, and his host is decaying. Or he’s a mermaid,” proposes a second. A third claims she saw him sprout wings after school and fly away into the east, suggesting that Seales has no more need for legs.

Refuting the claims with a wave of his clawed hand and a conspiratorial smirk, Mr. Seales tells us instead that he “had a complete knee replacement in November.” He even went so far as to fake a limp as he stalked over to his scooter to show off his scooting skills.

As to where he got the scooter itself, students are even more befuddled. “He ate the last person who rode that chair,” suggests one. “He can’t let the scooter’s speed get below 7 miles per hour or it will explode and take the building with it!” a second student, who’s hair is inexplicably white and patchy already and seems to have ingested a near-fatal dosage of caffeine pills judging by his twitchiness, claimed.

It was rumored that Seales was seen doing burnouts on the second floor, yelling “Skeet, Skeet!”

“This scooter has been here for twenty years!” Seales cried, growing defensive and angry as he tried to avoid our persistent eye contact and various torture devices. “It’s been available for many of the staff before I ever used it.” We can only assume this was his attempt to conceal the dubious origins of his scooter. A fairly shoddy attempt, if we so dare.

Speculation about what Mr. Seales does on his cart abound. It was rumored that Seales was seen doing burnouts on the second floor, yelling “Skeet, Skeet!” but the whistle blower is admittedly obsessed with monster truck tricks, so perhaps they saw what they wanted to see. Another student, this one more credible because of his glasses and pocket protector, says he saw Mr. Seales careening recklessly into a group of students arranged into a triangle, purportedly “bowling for students,” as the nerd described. We then proceeded to copy his calculus homework and shut him in a locker.

Seales never confirmed nor denied the rumors¹ except for one: “I’ve gotten it on two wheels before,” he gloats, a sinister smile spreading across his face as he blares Eric Church from a speaker lying in the basket of his scooting machine.

Bravely, the Pine Needle decided to send two reporters  into the lion’s den to ask the local Seal himself what happened. Maybe curiosity and the search for better stories got the better of us, but perhaps it was fate that led us that day. Either way, we were determined to get to the bottom of this convoluted conspiracy.

“He scraped up our door with that scooter!” Kristina told us, tears building in her eyes.

Tire streaks and damaged door frames marked the path to Mr. Seales’ lair. Inside the dimly lit office, we saw the man himself, crouched behind his computer, without a doubt trawling the Internet for more scooters to pilfer. The stench of burnt rubber lingered inside the entirety of his office, a dark cloud of exhaust hanging just above our heads. He glared up at us from the throne dominating his office, and beckoned us forward, grudgingly allowing the interview.

We interrogated him to the best of our abilities, and there was no mistaking the beads of nervous sweat building up on his forehead as our claims reached closer to what we believe was the truth. Eventually wearied by our attempts, Mr. Seales mounted his fine scooting steed and led us out of his office.

Exhausted, frightened, and covered in motor oil, we left the interrogation, dreading the arduous task of sharing with the world the awful truth. As we attempted to escape the office, a desperate secretary latched onto us and begged us to gather evidence from the main office. “He scraped up our door with that scooter!” Kristina told us, tears building in her eyes. A quick glance around revealed she was telling us the truth; doors barely hanging from hinges can barely shut for their destroyed frames, and tire streaks mar the once adequate carpeting. We took a moment to sympathize with the victims and collect photographic evidence of the scene, then gave chase to our interviewee, who himself attempted to escape while our attentions were diverted. 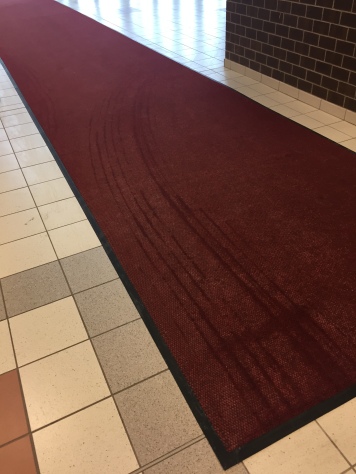 Seales,  his ears like a hawk, swooped around the corner as we gave chase, startling us with his sneaky approach. He gave us an ominous look and announced, “If I hit it, I’d admit it,” and scoots away through the ravaged doorway into the scarred hallway beyond. We all catch a Stephen King’s, “Christine” vibe from the relationship that Seales has with the scooter. With the pimped-out motor in his scooter, we had no chance of catching him, and returned to the Pine Needle office to tell our harrowing tale. 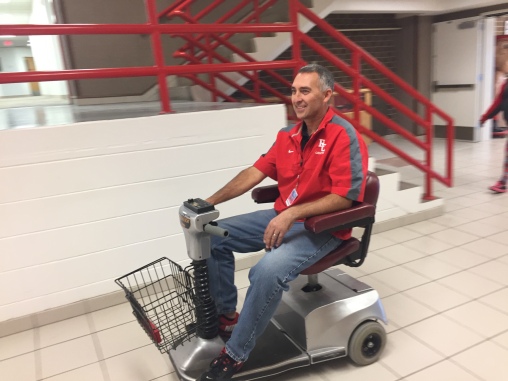 We never got to the bottom of the conspiracy, proving once again that even the best journalists (and most effective waterboarding techniques) can only do so much. The one thing Seales did confess was that the scooter will not be returning with him after Christmas break.  As to what will happen to him and the scooter, we have no clue, and urge the student body to exercise caution. As he raced off into unknown distances, Mr. Seales shouted an echoey warning to us; “The 21st of December…just you wait and see.”