Apparently everyone is particularly eager to start school this year.

At least, that is the case if you interpret enthusiasm based on the numbers of people who attended open house. Thursday evening’s open house drew 242 people, more people than it has in the last four years–the years of Mr. Talley’s tenure at Central High School. It could have been the biggest crowd ever, but statistics weren’t kept any farther back than that, so it will never be known.

The two hour evening open house means the teachers get to leave early on Friday, so they should be rejuvenated by the time students arrive on Monday and school begins in earnest. 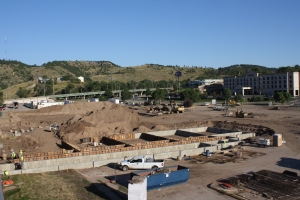 Looking for a place to park? Wondering how to get into the building? You didn’t think the construction would be finished already, did you? Though the piles of dirt are more impressive and there is concrete in places where there used to be grass, the parking plan isn’t that much different than last year. Students just park at the Civic Center and in the Central High lots teachers get to park in places where the lines are painted yellow. The official map of the parking plan is on the front page of Central’s website, or you can see it by clicking here. Dottie hands out the teacher’s parking stickers, but she’s a woman of integrity, so there’s little chance she’d dole out a parking pass or two to a persuasive student . . .

The year begins with a pink day again, though this year the “Cobbler Day” has been abandoned in favor of a traditional pink day. Last year students attended Red 1, White 1, Red 2, White 2, etc. and the day confused almost everyone. This year students will attend their four red day classes, go to lunch, and then attend their four white day classes. The set up for this year should be especially nice for freshmen who are trying to establish patterns of when to go where.

Activities are beginning before school, but it won’t be as bad as last year, when students did not return to school until after Labor Day and the volleyball and football teams had already played a pair of games before their classmates remembered they were a part of Central High. The football team hosts Yankton Saturday at O’Hara stadium (5pm) and the volleyball team plays quite a bit. Watertown is Friday night and Brookings is Saturday. Hope to see you there!