In the 1980s a new horror sub genre was born. “Slasher films” are films where usually teenagers are killed in sometimes creative ways, one by one. The killer usually wears a mask of some kind. “Slasher films” died out somewhat fast, as everyone saw through the films. They weren’t really “art,” more like “trash,” but . . . What’s wrong with that? A lot are entertaining and memorable. And The Prowler is one of them. 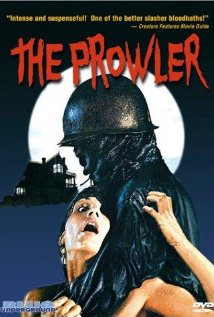 film is directed by Joe Zito (who a year after this directed Friday the 13th Part 4) with FX done by the master of gore himself, Tom Savini! If his name is on any 80s “slasher film” you better watch it, since all the best ones have him by their side.

What makes this one stand out from the rest is the plot. Most plots are simple: kids go to a camp and go off dinking around . . . blah, blah, blah. But this film’s main theme is World War II. It starts out with a “John Dear” letter . . . wait, I mean “Dear John” letter. Rosemary breaks up with her boy friend, who is in the war. He doesn’t really take it too well.  She goes to a party, and she and her new man get stuck. Well, to be more specific, I mean they are going to “funky town” and they get pitch forked. Years later kids want to have a dance there once again, and some of the town people think it’s a bad idea.

But what can go wrong, right? BOOM! A shower gets a bit forky, BANG! There is something wrong with this guy’s head, POP! She isn’t going swimming ever again, ZAP! The sheriff is the killer, ZLOOP! His brains go missing. As you can see, this is such a lovely film. One rule I learned form this film is, if someone is going on a fishing trip right before a big event, you know something is up. Just stay home and eat ice cream in your sweats while watching “The Facts of Life”; it’s better than getting pitch forked!

Over all, this is an underrated classic. It started the eyes rolling all the way in the back of the head, and you gotta dig that. It’s not for everyone (movies like this are why the R rating was invented), but it’s good to watch with a group of friends, or even on a date. True horror fans will love this.

One thought on “The Movie Buff: A Look Back on The Prowler”