By Robbie Freidel and Daniel Lang 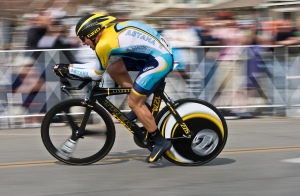 The use of performance enhancing drugs has dated back to the first Olympic Games when Greek runners used opium concoctions to gain the upper hand in foot races. Since then, the worldwide use of such drugs has only increased. Professional cycling, among many other sports, is now an event dominated by the use of these drugs. As of August 2012 the cyclist to whom the world most looked up to showed that he had not been left behind. Lance Armstrong was accused of doping during his years on the US Postal/Discovery cycling team after 1998. He has since been stripped of his seven Tour de France titles and has lately given up the fight against his accusers. Armstrong claimed that the process was too taxing and that it wasn’t worth fighting anymore. The series of events has led to questions ranging from, “Should I take off my Livestrong bracelet?” to, “How did no one catch him?” but the consensus is that he did use performance enhancing drugs and that he will not be returning to the sport of cycling.

The act of doping in cycling started in the 1970s. Today, a vast majority of professional cyclists have been involved in doping including twenty of the twenty-one cyclists who shared the podium with Armstrong at the Tour de France. Doping is the action of taking performance enhancing drugs or performing blood transfusions in order to gain the upper hand in high elevation races. Recent anti-doping cycling teams such as the Chipotle/Slipstream team have been launched in order to suppress the action in professional road cycling, but these efforts are dwarfed in comparison to the vast amount of cyclists involved with the act. Many anti-doping administrations and enthusiasts have blamed the abuse of such actions on the highly competitive nature of the sport. David Millar, an ex-doper and professional cyclist, explained that “We build sports up on to a pedestal which perhaps it never belonged to be on.” This statement rings true now more than ever. Cyclists train their entire lives to get on teams which take them to legendary races such as the Tour de France or the Tour de Switzerland. When faced with the choice of doping to improve performance to get a chance at a title or fading into irrelevance, most succumb to the temptation. There are few who actually manage to keep a clean career and those these riders the population owes their deepest respect. These elite few are the renegades of the professional road cycling world. The question remains, however: do those who follow the common trend and utilize doping deserve to be driven from the sport?

Nobody denies that Armstrong and the other elite cyclists have incredible talent, but in a sport where a one percent increase in performance can mean the difference between first place or fiftieth, the lure of attempting every possible way of gaining the upper hand can be simply too much. For athletes like Armstrong, who are incredibly driven, a tiny increase in performance is a huge competitive edge. That edge, whether legal or illegal, can bring about accomplishments such as Armstrong’s seven Tour de France titles, and three triathlon titles, all of which followed his heroic comeback to cycling after his bout with simultaneous brain, testicular, abdomen, and lung cancers.

But that edge, if gained through means outside the rules, can come crashing down like a ton of bricks. Every accomplishment Lance has ever attained is now in question, his sponsors have dropped him, he has stepped down as chairman of the Livestrong Organization, and he has lost the respect of cycling enthusiasts everywhere. Although Armstrong has never been proven guilty and he has never admitted guilt, his refusal to fight the latest charges against him has been interpreted as a sure sign of guilt. His once unparalleled reputation is in shambles, and he has little hope of regaining his elite status. He has been banned from cycling and all other competitive sport governed by the U.S. Anti-Doping Agency.  This has truly been a tremendous disappointment in the world of sports.

Where do sports go from here?

With the recent trials and the mass media coverage of doping in competitive sports many questions have come to the attention of fans everywhere. With such a vast number of athletes doping, how is it possible to control it? Should organizations just allow doping in competitive sports? In the realm of road cycling the decision to legalize doping would be one way to ease up on regulations. However, it would also downgrade traditional ethic and make previous records completely inferior. Would it be better to have amazingly strong, drug based super-athletes or to strive for an old fashion work ethic and natural ability? Daniel Tosh stated in a comedy sketch, “I think pro athletes should be forced to use steroids. I think we as fans deserve the greatest athletes science can create.”  Though a joke, the grounds of this statement are very real.  Fans are starting to question how they feel about the athletic greats who have been accused and whether it matters to them that these athletes use such substances to improve their performance. This is especially the case with Lance Armstrong, one who has inspired so many with his cancer-to champion triumph.

The athletic world may be a substantial distance away from ever legalizing doping in competitive sports, but in light of the recent events, the ethical acceptance of the action may be upon the horizon. The matter is manipulated by a network of fans and their morals. The next generation of sportsmanship could see a drastic change–for better or worse.