Aero has been wrestling at Augustana for three years. During Aero’s first year, when he wrestled as a red shirt, he posted a 19-4 overall record at 184 pounds. The next year, his official freshmen year of wrestling, Aero wrestled a 24-11 overall record at 184 pounds. But as a sophomore Aero has leaped to front stage, boasting a 26-1 record so far and winning  the super region three, 184-pound championship. How did this win compare with Aero’s state championship in high school? “I couldn’t say if one felt better than the other,” said Aero, “but they both made me feel incredibly blessed by God to be able to accomplish each of those goals.” 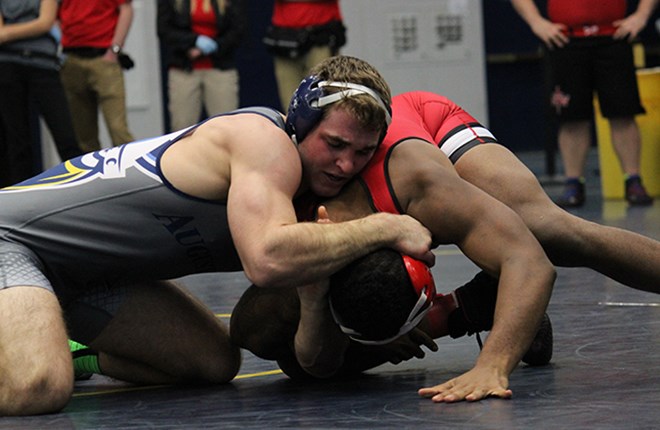 For the first time in his career Aero has also qualified for the NCAA National Championships and will be Augustana’s lone representative at the 2015-16 NCAA Division II Wrestling National Championships at the Denny Sanford Premier Center in Sioux Falls March 11th and 12th. Concerning Aero’s goal as a college wrestler, he said, “The ultimate goal for me in college is to win a national title. I want to make my family, friends, coaches, teammates, and girlfriend proud! The goal is always to be the best and that goes for any wrestler.”

Aero Amo has a clear talent for wrestling but doesn’t know if he’ll take it any further then college. “I haven’t really thought that far ahead yet. I’m pursuing a career in nursing right now but if God calls me to pursue a career in wrestling I’ll gladly follow.” Whatever his choice may be, he will surely succeed.