Dozens of Central High School students were among the crowds who witnessed Bernie Sanders’s  busy day in South Dakota Thursday. Excused by their parents, students spent the day across the street at Memorial Park, Sanders’s third stop of the day. He had started his day with a visit to Mount Rushmore, traveled to the Pine Ridge Reservation, where he spoke to 800 people, made his way to Rapid City, and ended his day in Sioux Falls, where he spoke to over 4,000 people.

Here in Rapid City at 10 o’clock, two hours before the gates to the park opened and four before Bernie was scheduled to speak, there were already people lined up and waiting to get in. There were tables and stands where people were selling t-shirts, pins, and hats (possibly illegally), and security and cops surrounding the area. Occasionally chants of “Bernie” or “Feel the Bern” would start up. There were volunteers walking the area with voter registration forms, encouraging the people who were waiting to register to vote. It was obvious that people were excited.

The park quickly filled up after 12 o’clock as the gates were opened and people came in. Over 2,000 people made their way to see Sanders speak. For the two hours between the opening of the gates and Sanders’ scheduled speech time, music of all genres played through the speakers and groups of people gathered to get spots as close as they could to the place where Bernie would soon be speaking. 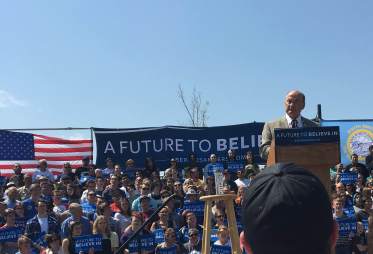 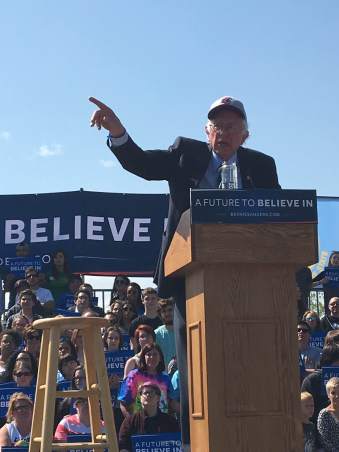 Bernie Sanders
Shortly after 2 pm cheers started when people sitting high up on bleachers could see Bernie’s crew on their way in. The excitement in the air was palpable.

The first person who spoke was Katrina Wilke, a local democrat and Bernie Sanders supporter. She introduced the next speaker, Jay Williams, who is the democratic candidate running against John Thune for the Senate. Williams also spoke in support in Bernie and he highlighted some of his beliefs and the platforms of his own campaign. Next, Troy Heinert, a state Senator from Mission spoke and, finally, introduced Sanders.

Sanders had not known how bad the health care conditions were on the reservations until he had visited Pine Ridge.

Sanders touched on many topics during his speech; tuition-free college, universal healthcare, raising the minimum wage to $15, and more. He spoke passionately about the political revolution taking place currently with supporters of his campaign, and talked about the importance of getting everybody involved. He also talked about the struggles facing Native Americans living in the US, stating that he had not known how bad the health care conditions were on the reservations until he had visited Pine Ridge and talked to the people there. This emphasized the need for universal health care in the United States.

Sanders’ impassioned speech lasted just over an hour, and was met with loud cheering and applause at many points. When he was done speaking he walked around and shook hands with people who were close to the gates, and then he was off on his way to Sioux Falls. He left an impressed crowd behind. Even people who are not Bernie supporters were excited to have seen a presidential candidate speak in a state that does not always get that opportunity.

Bernie Sanders was visiting to campaign for South Dakota’s primary vote, which takes place on Tuesday, June 7. South Dakota has a semi-closed primary, which means that if you want to vote for Sanders you have to be registered as either a Democrat or Independent.