While most artists will explain that the purpose for their work is to experience and create beauty, not to compete, the reality is that if you push them enough they’ll admit this: it’s nice to win too. 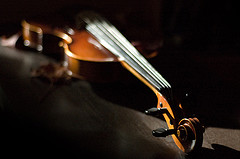 month to share the beauty they are capable of creating, and their sound was so beautiful it won first prize.

The competition was called the National Orchestra Festival (NOF) and it was part of the 2011 American String Teacher’s Association Conference held in Kansas City, Missouri on March 17-19. The Central Chamber Orchestra was judged against seven other orchestras, each of which had earned its spot in the competition through a taped audition.

The judges evaluated a live performance of each orchestra and considered its musical technique, its tone quality, its intonation, its rhythm, and its interpretation. The Central Chamber Orchestra impressed those judges and earned first prize among the competing high school groups and the overall grand prize among the 20 competing groups in all age groups and divisions.

Both groups were praised for their fine musicianship and professional approach and received additional comments and suggestions about their musicianship and technique in clinic sessions that took place after their performances.

Both groups were directed by Rapid City Central’s Director or Orchestras, Bruce Knowles.

Photo credit: “This maple box” on Flickr by: Brian Hathcock