A senior Cobbler takes an in depth look into the top 4 movies you should be watching on Netflix this Halloween.

Halloween is fast approaching, and many Americans are once again stacking up bags of candy in preparation for a long night manning the front door. In the spirit of those noble folk willing to take that responsibility upon themselves, we here at The Pine Needle have compiled a list of the top 4 Halloween movies on Netflix to watch while handing out candy.

Hush is a movie not unlike many other horrors, but it has a very interesting gimmick. The story follows a deaf woman who lives a secluded life in the woods who then must fight for her life against an unheard attacker. The woman being deaf lends a very interesting and quite spooky characteristic in the film that is unique to it. 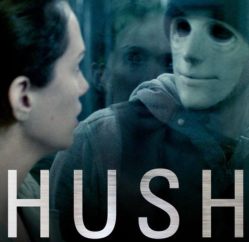 It Follows is a unique take on the 80’s horror genre. The main villain of the story is, for lack of better words, a sexually transmitted demon. Once you’ve caught it, it will follow you at a walking pace until it catches you, then allowing it to kill you. The only way to get rid of it is to ‘transmit’ it to someone else. The cinematography in this film is stellar and its scene composition is very reminiscent of the movie Halloween. While not the scariest movie, It Follows is an engaging, uniquely scripted story.

This outstanding love letter to classic horror movies follows a group of kids that play DnD together and one of them happens to vanish. They then find a strange girl in the woods named 11 who they think could have something to do with their friend’s disappearance. Throughout, they face off with a demon-like creature from a different dimension that has been eating everyone in town, a sheriff gets pulled into the group, and they uncover a potential government conspiracy. While not a movie, this modern classic is more that worthy of a spot on the list. Bursting on to the scene in 2016, the series was met with an explosion of positive feedback and has been quickly solidified itself as a titan in pop culture.

This story is about a pair of paranormal investigators that are set to a house to debunk a set of strange happenings that have been worrying the residents, but as the film progresses they find that there is something bad going on here. The movie starts off maybe a little too slowly paced, but as it goes on it builds into something that really spooks your socks off. Director James Wan’s use of minimal CGI and mostly practical effects leads to surprisingly real feeling, well earned scares that leaves the audience satisfied.